Tried to run SteamWorld Dig2 from GoG. It just died with this:

This is from my understanding a fixed bug in GLEW on Wayland but requires an update of that lib – which is probably not gonna happen any more.

Fun enough we can work around this by starting it with SDL_VIDEODRIVER=X11 ./Dig2 under Wayland, with from my understanding invokes|provokes XWayland and brings us back to Wayland. And since I want to play this on my couch with my Steam Link I added the game to my library and set it’s start parameters to SDL_VIDEODRIVER=X11 %command% – Et voila… 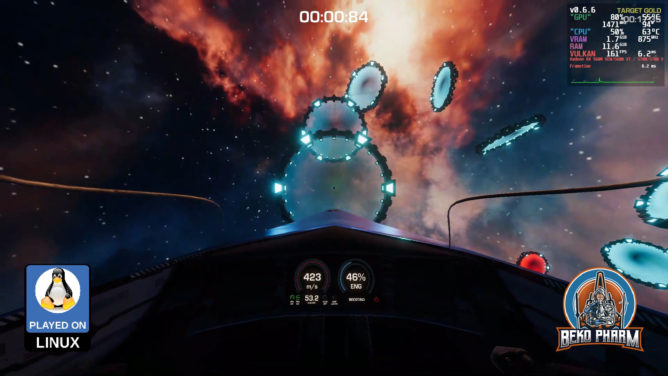 Fly Dangerous 5.0 was released and it is packed with new features like reflections on the ship, Steam leaderboards and ghosts! So you can basically race against yourself or others from the leaderboards!

As usual I gave it a spin and had a blast.

First things first though. The Linux version defaults to OpenGL and this resulted in like 25 FPS for me and the input of my X52 Pro (mapped as XBOX controller) was so laggy that I could sip coffee during each course correction. This was when I remembered the magic parameter -force-vulkan from other Unity games and from here it was smooth sailing. Eventually I ended up with the game start options obs-gamecapture for recording, mangohud for some FPS info and -force-vulkan for… well, FPS.

The flight mechanics changed a little bit and @jayleefaulkner explains this in great detail in the video Alpha 7: https://www.youtube.com/watch?v=I2sn26HVY7o so I’m having a learning curve ahead of me… again!

Anyway, I’m not doing too bad after some rounds. Only issue left is that I can not disable the flight assist for some reasons. Probably a bad binding but I was eager to play so I went with it.

Oh and did I mention that this little gem is still for free and even opensource? 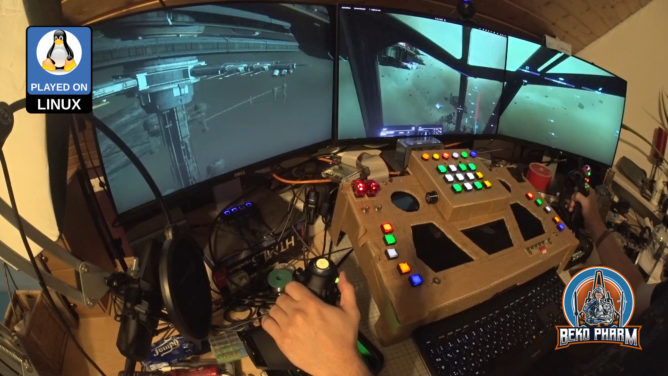 Behind the scenes recording so you get the idea of the setup followed by some Star Citizen gameplay: 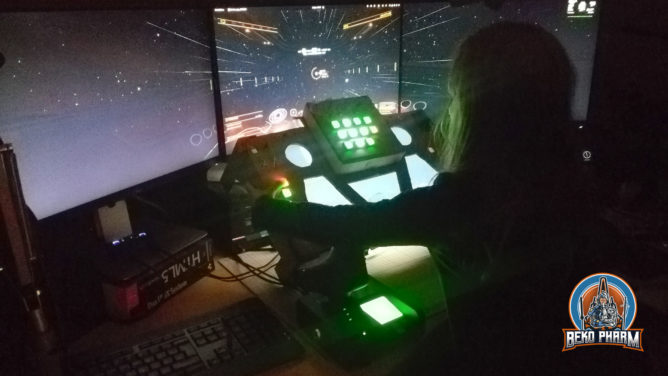 The year was 2005 and I was playing Codename: Gordon, a 2D sidescroller set in the Half-Life lore, using Macromedia Flash Player run via Wine on Linux.

Apparently this game can still be installed by any Steam user with the command steam steam://install/92 because it was part of the freebie package “0”.

…and no single Proton was in sight 😛

A new alpha version of Fly Dangerous was released by the amazing @jayleefaulkner over at https://jukibom.itch.io/fly-dangerous introducing multiplayer! #FlyDangerous together!

Find the dev vlog at https://www.youtube.com/watch?v=UlAslpCJOyI

4 years ago I marvelled at the fact that a backlog of games is piling up on Linux PC. Now I had to split my reader into English and German for news on #linuxgaming

It’s just too much for a single news category 😜

Can’t get enough of Diaspora: Shattered Armistice (on Linux PC). Of course with my DIY headtracker 😃 And while we’re at it we demonstrate https://arwes.dev/ – because nobody said that a sci-fi interface made with React can not be used as stream overlay too 👍

This is a Work In Progress and a DEMO.

Made to learn some React, get some freakin cool UI _and_ save me bucks on a stream overlay 😀

Seems to work nice with my DIY headtracker on Linux PC too. Sadly I got quite some frame-drops due to recording (and probably multi-head too). It works way better without all the cameras and a life-stream going on but I think it’s enough to get a good impression. Botched emergency landing included xD

Warning: This may fuel a desire to re-watch the BSG series again 😀