December, 1943: A badly damaged American bomber struggles to fly over wartime Germany. At the controls is twenty-one-year-old Second Lieutenant Charlie Brown. Half his crew lay wounded or dead on this, their first mission. Suddenly, a Messerschmitt fighter pulls up on the bomber’s tail. The pilot is German ace Franz Stigler—and he can destroy the young American crew with the squeeze of a trigger...

It was Sabaton who introduced me to the story of Franz Stigler and Charlie Brown with their song “No Bullets Fly” (Animated story video https://www.youtube.com/watch?v=dslO-3GgenY).

I was exposed to stories about the mighty B17 thanks to MicroProse with their title B-17 Flying Fortress (1992) early so my interest was easily triggered and I was delighted to find out that there is a book about this war story, that apparently really happened.

Got some more info from the Sabaton History channel (https://www.youtube.com/watch?v=LSU7HedRVGY) and purchased the book A Higher Call: An Incredible True Story of Combat and Chivalry.

The story and the aftermath, that are still happening today, really touched me. There is also the fact to read about this fascinating story written by the American Adam Mankos, who in the beginning didn’t care about the point of view of an former enemy, a German, at all, bringing this event after much research to paper: https://adammakos.com/a-higher-call-book.html

Read it. Or listen to the audio book. This may surprise you.

I finally finished the recent (last?) trilogy of The Realm of the Elderlings with the book Assasin’s Fate by Robin Hobb. I don’t really recall how the first one (Assassin’s Apprentice, 1995) made it onto my shelf but I really enjoyed the ride. Kinda slow paced sometimes and mayhap a little bit strong on the self-loathing and moaning side this series really delivered an epic journey full of magic, dragons, murder, more magic, beasts and ships(!).

In fact I think I liked The Rain Wild Chronicles most due to the very interesting setting and it was really nice to come back to this part of the realms in this final book. The chronicles influenced me that much that the machine hosting this very blog is named “Paragon” for some years by now 😀

Not sure what to make of the end especially without spoiling the read but I guess it could be worse. I’m… okay with it. Ish.

We were fighting on the wrong side, of a war we couldn't win. And that was the good news. The Ruhar hit us on Columbus Day. There we were...

I dived into the Expeditionary Force series by Craig Alanson recently starting with Columbus Day (ISBN: 978-1520126241) and I had no idea what I’d bargain with before. The story sounded kinda like generic boring sci-fi military stuff and I was not too excited about it.

Making my way through the first part I was that close to dismiss it as really boring when Skippy, a super advanced alien AI residing in a beer can like casing [and also asshole first class], approached the scene. From here the story sky-rocketed – or whatever term would fit for a space opera – and I caught myself breathless from laughing on various occasions..

Several books later I conclude it is still a kinda generic sci-fi military stuff story. A small group of thrown together people fighting against all odds outsmarting their opponents – that is the whole galaxy so far – and somehow surviving whatever the universe throws next at the band. It’s also a hilarious fun story that sent me rolling on the floor laughing several times thanks to the dialogues between Skippy, Joe Bishop and the rest of the Expeditionary Force.

I’d love to link to craigalanson·com but the website has a whole manifest of stupid Terms And Conditions about linking to it that I will not even bother to read and understand.

Update: @CraigAlanson is also on Twitter and I totally missed to tag him buuut what to I know since neither Twitter account nor website link to each other so I’ll never know if it’s _the real_ beer can or just a submind 🤷

Hey! It's out! The Collapsing Empire, my twelfth novel, is here and available at your favorite bookstore and/or online retailer (in the US/Canada; in the UK it's out in two days). It's the first book in the new space opera series (called "The Interdependency") and introduces some of my favorite characters ever in a universe…

The Expanse tells us what happens when paths open and distances “shrink”. The Collapsing Empire does kinda the opposite. The paths close and humanity has to deal with it.

The crew of the Rocinante are part of a vast flotilla of scientific and military ships going out to examine the artifact.

In the vast wilderness of space, James Holden and the crew of the Rocinante have been keeping the peace for the Outer Planets Alliance. When they agree to help a scientist search war-torn Ganymede for a missing child, the future of humanity rests on whether a single ship can prevent an alien invasion that may have already begun…

Hard to put it aside. I haven’t enjoyed such a great SciFi novel in years 😀

The complete guide to recognising and understanding timber-framed buildings. Using his own drawings, diagrams and photographs, Trevor Yorke takes the reader through the story of these buildings from 1200 to the present day. 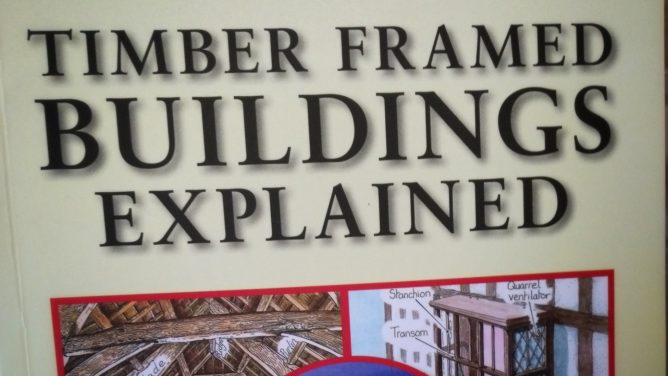 The Fifth Elephant is a fantasy novel by British writer Terry Pratchett, the 24th book in the Discworld series. It introduces the clacks, a long-distance semaphore system.

I’d like to link to terrypratchettbooks·com but they have a hilarious stupid Terms Of Use about linking or even quoting that I will not support.

Jingo is a fantasy novel by British writer Terry Pratchett, part of his Discworld series.

I’d like to link to terrypratchettbooks·com but they have a hilarious stupid Terms Of Use about linking or even quoting that I will not support.