I want more control over what my microphone picks up on screen share in video conferences or during streaming but I don’t want to buy a hardware mixer. I also want to be able to disable the microphone with a hotkey but it doesn’t have any physical switch. So achieve all this I utilise PipeWire to run a bunch of virtual devices that I can control via pavucontrol and obs later. Video conferences get this as “default device” so they don’t get a chance to mess up my audio setup (looking at you Teams). The steps are the same for PulseAudio if you don’t have PipeWire (yet).

The 16 is not important. It’s just my kind of humour as my first Linux PC had a SoundBlaster16 😛 It also is a pattern sufficient enough so I don’t mix this up with the zoo of real microphones or audio sinks attached to my computer.

This is already sufficient enough so that everything played on the device BekoBlaster-16 can be recorded on the BekoMic-16 again, that I select as input microphone for Browser (video conferences) or Discord at this point. This can be done with pavucontrol – or later in obs.

This isn’t enough, of course. In case of e.g. playing music (or streaming a game) I’d also want to hear the sound myself too. For this I create an additional null sink and a combined sink. With this approach I can later fine tune in obs what gets recorded to which audio track (where audio track 1 is the one used for streaming) and what ends up on the BekoBlaster-16, that acts as my monitor and due to the remapped source also as virtual mic.

With this (and my headset connected) it starts to get crowded in my device list.

As you can hear err… hopefully see: The sink OBS-Blaster-AND-Headphones is now selected for playing music which results in the music being played on the next virtual sink OBS-Blaster and my h.ear (MDR-100ABN) headphones. The same could be done with the BekoBlaster-16, of course, but bear with me. We still don’t have any real microphone added to the mix and while this can be done with PipeWire or PulseAudio alone too I need this usually with video included too so obs it is.

Here the most important setting is the monitoring device, which is the BekoBlaster-16 from the beginning, that can be used as microphone in e.g. Discord later again.

Next is the set-up of the mixer where I’m interested in 4 devices only:

This way I can control in great detail what ends up on the Discord / a video conference / game streaming, while I get the full power of obs scenes (where I also do my greenscreen mixing), mute microphones as I see fit and have some material to work with later when I decide to make a video on stuff. Here I did set up Discord to read from the virtual BekoMic-16 and output to my headphones only (where no recording in OBS is done) – so perfect for most Discord / video conference sessions.

Don’t mind the flipped video preview. That’s perfectly fine and will look right for the viewers later. This is by the way the virtual camera sink feature of obs and the v4l2loopback kernel driver that I also read from in video conferences instead of the real webcam. This way I can also control exactly what the webcam shows – zoom / crop included.

The whole mess looks like this visualised in helvum, a patchbay for PipeWire.

Most of this explains itself. The WEBRTC VoiceEngine is the recording of Discord. Other devices may float around but are not used at the moment of this snapshot.

More on this and proper documentation: https://gitlab.freedesktop.org/pipewire/pipewire/-/wikis/Virtual-Devices

Oh gods I can’t tell how much the dialogs that pop up every time I open OBS Studio annoy me because it can’t remember or recover previous screencasts and I’ve plenty in my scenes. That’s my most sour point after switching to #Wayland nowadays. Real heroes at work right there!

Today @scy@scy.name sent me down the LUT rabbit hole and while I’ve no idea what I’m doing I’m happy with the improved Chroma Keying result in #OBSstudio 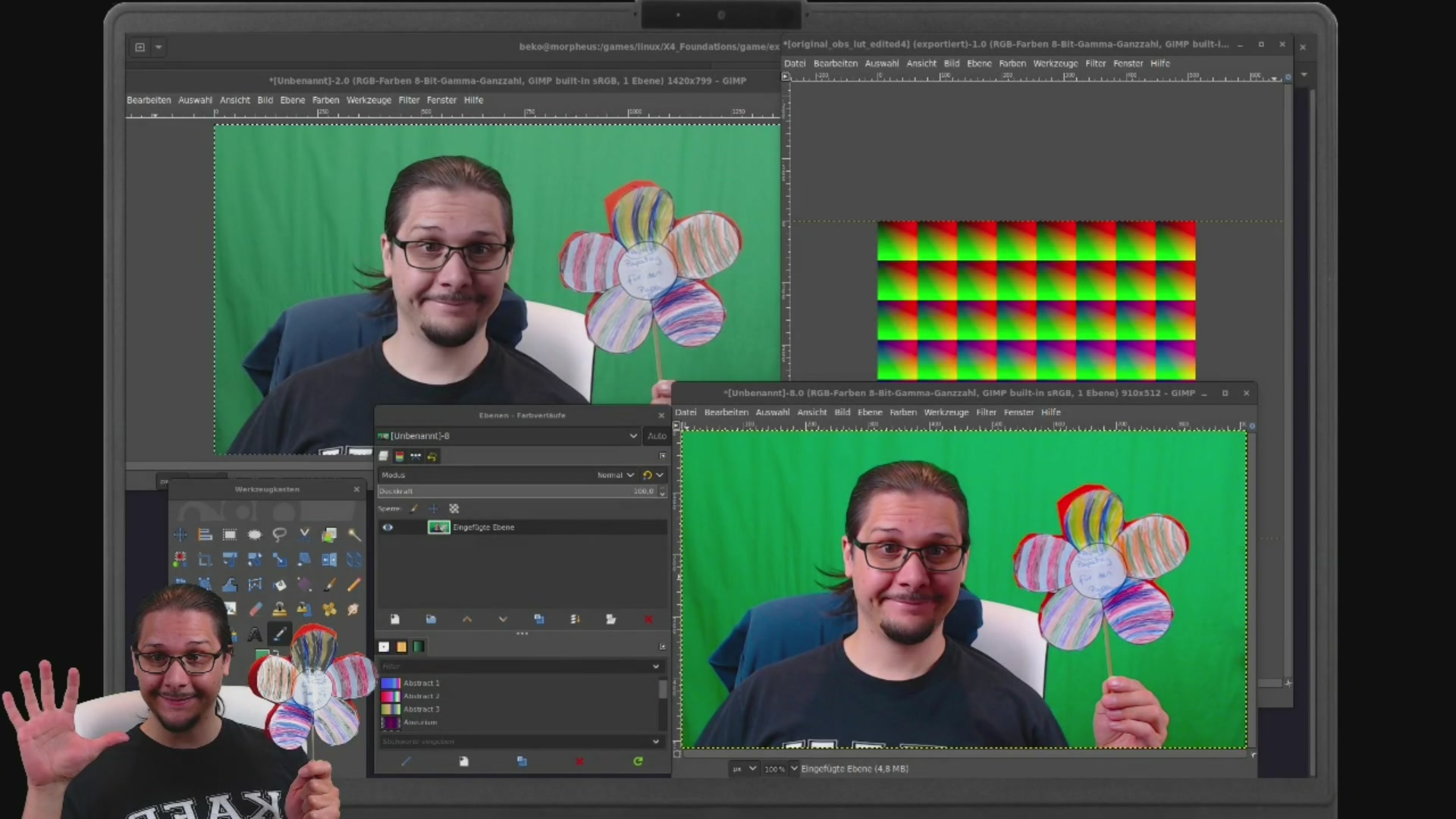 (Admire my beautiful colour palette provided by my little one for Father’s Day!)

I have seen some articles in the past which explain how to build the ecosystem around your video streaming, such as live chat and forums, but which leave the actual video streaming to Twitch.tv. I made a note the last time I saw one of these articles to write one of my own explaining the video bit. As is often the case with video, we’ll be using the excellent ffmpeg tool for this. If it’s A/V-related, ffmpeg can probably do it.

+++ This is a backyard hosted website on 2nd hand hardware, which means it sometimes goes offline. Please hold the line. +++