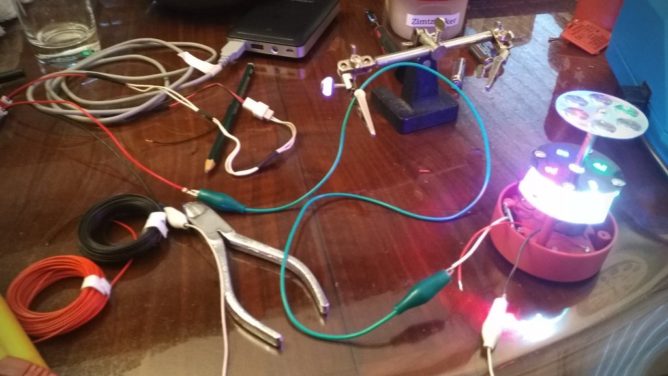 My little one bought herself some LED light “projector” from her pocket money. It comes with 4 ultra bright LED in various colours shining through lenses on a slowly rotating axis to project various motives on the ceiling. It also features a timer that disables the LED after 6 hours for 18 more hours. Kinda neat basically. It was sold as “Leucht-Projektor” from “Dekor” but I’m pretty sure it’s just one brand of many this thing is sold as.

On the next day she complained that some colours were gone. At first glance I thought that the LED simply broke down already. It was a cheap article after all and there is way too much electronic trash out there after all. So when the projector came back to life with all colours some hours later I was befuddled at first. This was when I noticed that the LED that disappeared were the “expensive” ones requiring a higher voltage to work.

LED are usually depending on a certain minimum voltage based on their colour with red and green on the lower end and the missing white and blue on the upper end. You can probably find some nifty charts when searching for LED colour voltage charts. So what we had was simply a voltage drop due to… empty batteries!

Well we all know that products with batteries included come with the cheapest batteries the market had to offer so we didn’t think much of this when we inserted a bunch of fresh batteries.

Rinse and repeat – on the next day the little one requested _more_ fresh batteries.

Now I got curious. Time for some maths. Usually an LR03 (AAA) comes with ~1200mAh and we got 3 of those. If we don’t know the required mA for a LED we guess it by rule of thumb with 30mA. There is also a little motor involved and certainly some IC too so I guessed ~150mA. This didn’t add up tho so I picked it apart.

Taking a closer look at the LED on the PCB and some Google Fu later I’m pretty sure that the LED in question are sold by AZAD Electronics as “High Power Super Bright LED SMD” and yeah, they come in different variants of 1W to 3W so it’s time for a meter readout and lo and behold, the readout came back with a total of 350mA! So with some very quick maths we get a total of roughly 10h of usage until the batteries are drained to a point where no LED will work any more at all. Hilarious considering that this thing has a timer to disable itself after 6 hours to restart itself after 18 more just to… die.

But Beko, what about rechargeables? You do the math! First of all rechargeables come only with 1.2V and next they only hold around ~750mAh – at peak! I’m not going to unscrew that frail battery compartment once a day and put any sort of new batteries in there while the old ones block the charger for all eternity. That is just insane and an economical and ecological nightmare!

Who the frak thought this is a good idea to sell it like that? And guess what, the bottom of the “candle” does have an opening for a cable so at some point during the design process this thing must have had a cable before.

Know what else could power this? USB! That comes with 5V and with 500mA max so we’re well within it’s limits. Also it will be attached to a charger and not to a PC. Admitted, without closer inspection of the PCB it was a gamble but hey, shiny new batteries usually have some extra ompf as well so when I play PCB designer with KiCAD I’d go with ~1.65V per battery anyway. Three in series are 4,95V – good enough! That thing is so cheap that I’d put money on the fact that it simply doesn’t die in droves on it’s users for good simply because nobody can afford to jam three new batteries into it _each day_ so what’s to lose?

If you may read a certain angry undertone here you’re correct. I’m so gorram tired that almost everything has to be custom-built into any usable state first nowadays.

Anyway, grabbed my soldering iron, prepared a test setup and slaughtered an old USB Typ B cable I had no more use for and fixed the gorram thing. There shall be light. In various colours. Without any further warranty 🖕

Where I ramble a lot about sold electronic trash and fix the LED projector of my little one by replacing it's extreme power hungry battery backed power supply with an USB cable.

Where I ramble a lot about sold electronic trash and fix the LED projector of my little one by replacing it's extreme power hungry battery backed power supply with an USB cable.