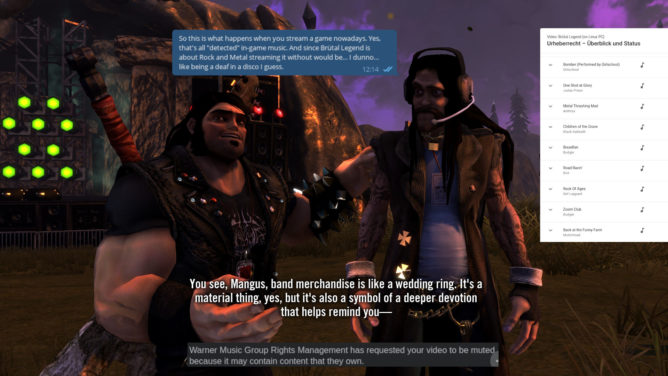 So this is what happens when you stream a game nowadays. That’s all “detected” in-game music. And since Brütal Legend is all about Metal, garnished with gore and swearing, streaming it without would be… I dunno… like being a deaf person in a disco I guess.

The funniest one was Facebook. The part where the game glitched out early and played an endless loop of music for 45s got flagged and the stream instantly killed. Fat chance disputing that.

The best part? This is supposed to be under a CC-Non Commercial license – I am not monetizing any of this _at all_ but that doesn’t save me from ridiculous claims. Google as of today lists ~33.600 videos just on this game. How the hell is anyone out there making Let’s Plays or – *gasp* – actual music nowadays?

I can totally see how people flock to the video in masses instead of buying some gorram track on Amazon or Spotify just to listen to that endless loop for 45 seconds – my swearing and some hacking and slaying included.

5 thoughts on “Metal is dead”