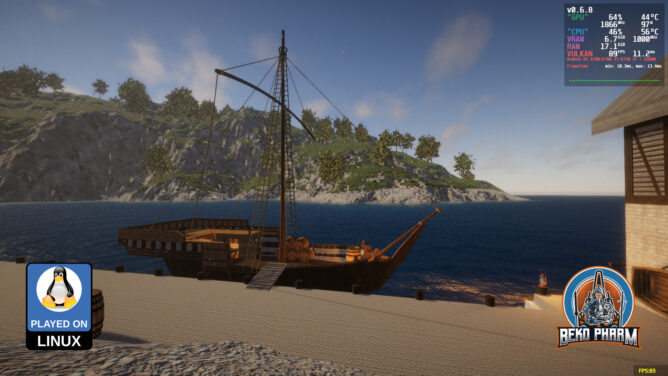 Some weeks ago I started making a #cog ship for #RisingWorld based on NZ-43 (14C) and while I was happy with the basic result it helped me mostly to get an understanding how such ships were made.

I never cared much about ships before and had absolutely no idea about this topic at all. During my research to close that gap, which consisted mostly of reading into Flevobericht, 331 (ISBN 9036910862) and following the awesome actual model builds by @silverman834 at https://modelshipworld.com/topic/25300-a-small-cog-by-silverman834-scale-120-c-1410-finished/ did I decide to reapply the lessons learned and go for the famous so called “Bremen Cog” ship.

This is a very specific ship type that was widely used from the 12th century on for trade via the sea. It was between 15 to 25 meters long, had one square sail and was crewed by approximate 12 people that worked in shifts. Unlike other sailing ships it was very reliant on wind direction but it’s flat bottom permitted it to be beached without taking damage so it could be unloaded everywhere e.g. during low tide. The aftercastle on it’s stern deck makes for a very distinct impression and can be recognized from many period depictions of ships. Several full sized replica have been built to this date.

The “Bremen Cog” is the best preserved example of this ship type. It’s wreck from ~1380 was discovered in the Weser in 1962. It took almost 40 years until it could be presented to the public. It’s my understanding that the conservation techniques applied had to be developed first. It’s on display in the German Maritime Museum and the cog apparently played a huge role in the founding of the museum itself: https://www.dsm.museum/en/exhibition/exhibitions/bremen-cog

The museum is located in 27568 Bremerhaven / Germany (and closed during the wintertime). No idea when I’ll get the chance to visit this but the museum does also foster a YouTube channel and one of the most recent videos up on their channel is a drone flight around and through the Bremen Cog made by Dennis Vogt so make sure to check this out: https://www.youtube.com/watch?v=KjYigiyF014

So why did I take this effort on me to recreate this famous ship type once more in a game? Curiosity and hyper focus I guess. I can tell you it was cumbersome because the game does not support bend objects so everything is basically a block. It does also not feature tools for e.g. Bézier curves or something. I spent quite some hours trying to get the hull and proportions right and while the superstructures are kinda opinionated I’m really happy with the end result. I also saved a lot on the ropes and while I know in theory how this should work and look it’s just _too much work_ to get this right in the game. So I only went with the most important running ropes. I hope any navigators reading this can forgive me 😉

I also prepared a variant without a sail and maybe I’ll even create a version with a reefed sail and with another version of the bow someday. I don’t know yet for I feel very exhausted from this little side project for now.

It’s also very sparse on final details because I can imagine that the blueprints for this ship will see a lot of reuse on various servers of the game so it should be really easy to individualise each placement with different colours or textures or cargo.

Speaking of: The blueprints for Rising World (Unity) can be downloaded from here:

You’re free to share and adapt this work as indicated by the CC-BY-SA 4.0 license. Please do inform me if you make use of this simply because that would make me very happy. It’s not required though.

One thought on “A Bremen Cog for Rising World”

I made the #Bremen #Cog ship for the #RisingWorld - game blueprints included.

I made the #Bremen #Cog ship for the #RisingWorld - game blueprints included.