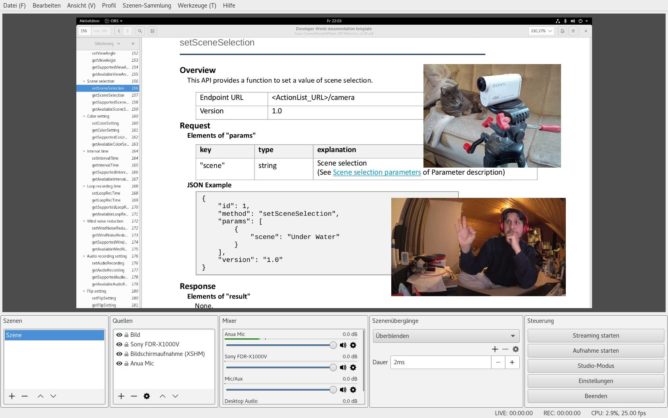 Today I found out that I can use my Sony Action cam as… webcam (under Linux) for e.g. streaming or view control 🙂 Not really officially supported. Manual says: Use our shiny Android App and ustream (costs). The trick is so set it into ‘multi camera mode’ to trick it into joining my regular wlan via WPS. Once it’s on my wlan I can easily discover it’s API Scheme and make use of the Sony Camera Remote API controlling it via… JSON 😀 Now it’s just a matter of pointing OBS Studio to it’s lifestream. E voila 😀 I can now even write my own App instead of using that gorram Android App 😀

Played with the API. Taking photos (and download), change various settings, camera mode or start/stop recording worked flawless. Some other stuff I tried, like accessing the storage, not so. Probably doing something wrong.

Update: To register as regular v4l2 device that can be accessed e.g. by a webbrowser one can make use of a v4l2-loopback device.