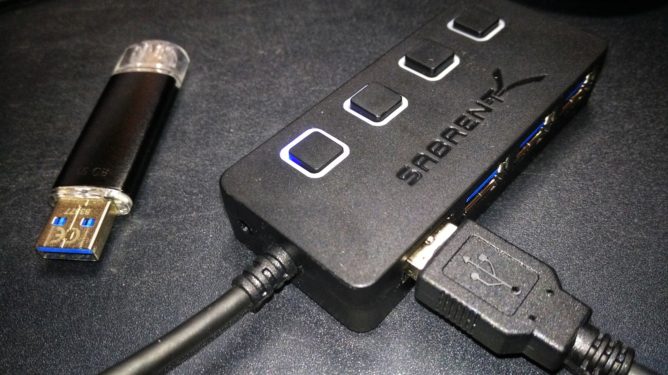 I recently purchased the dead cheap Sabrent USB 3 Hub for 11.99€ not expecting much. I was really just after a replacement for my DIY usb interruptor (that still does the job) and I was already laughing at the claimed USB 3 support when I bagged this. I do have some USB 2 HID devices that I only need for gaming and do not want powered up (and wasting plugs) on my computer all the time. This is the sole use case for the purchase and it did claim to have Linux support – which usually means that the xhci_hcd kernel driver recognizes the device as something usable.

So I really wasn’t expecting much when I pried the device open. There are not even screws (but it’s not glued, too – bonus?).

So the first things I noticed is an unused power connector (marked with 6.1V?) and an attached usb cable that looks like it was melted on the pin connector. Yuk. There is no stress relaxation for the cable. It just looks like there is one but the plastic piece in question can freely slide around the cable. Better don’t pull that.

I’m not sure why there is a power connector by the way. This is a completely passive hub and I didn’t feel lucky to try this without further examinations on the circuit.

The backside is more tidy but I can spot at least two soldering points for a button that may be cold already. Too be fair it’s the backside so this may not be an issue and only affect stability of the button.

The reason I pried this open is basically that I didn’t expect this to really have USB 3 capabilities at all so I wanted to check that they didn’t just use “blue” ports. I’ve been burnt by this before. Everything looks to be in order though and the datasheet for the built in VL815-Q7 by VIA Labs, Inc. (VLI) does indeed list the chip to be capable of USB 3. VLI describes it as a “USB 3.1 Gen 1 4-Port Hub Controller” and it is known to work “under Windows, Mac OS X, and various Linux kernels without additional drivers” . So let’s plug it in:

And sure enough it claims to be up for the task of both, USB2 and USB3 indicated by the 480M and 5000M. So let’s plug an USB3 mass storage device and check some readouts (no write tests made because I had no empty usb3 stick around). I used the good old dd command for all: dd if=/dev/sde2 of=/dev/null bs=4k

Connected to the hub:

Connected to the motherboard directly:

Connected to the computer case ports on the front:

So while this is not stellar it definitely is not just USB 2 speeds and probably limited by the USB stick itself, since I get similar readings on all ports. Speed wise it’s at least not in the way or limiting the device and my use case are joysticks, gamepads and maybe a gaming keyboard. Nothing that would require such speed anyway.

During my first tests I played around with the power button for an empty outlet and I really didn’t expect this to affect other outlets but it does. It looks like the power breaks down shortly and the error log is filled with I/O errors for the mass storage device.

This will result in data loss during write operations. While this is not a problem for HID devices, I mean who cares if a click doesn’t make it, one should definitely not use this for disks or at least not touch it while it’s writing until it’s indeed “save to unplug the device now”.

Also it must be kept in mind that this is a passive hub. USB 3.0 is specified with 5V and 900mAh. This does not magically multiply for this model – it’s 900mAh _total_ for all 4 plugs and to be fair that is clearly stated in it’s description.

It does suck that it may be fine speed wise but does exactly the one thing I bought it for poorly: Disable one and only one plug at will. Keeping this in mind it does (surprisingly) work as advertised.

Oh yeah, and don’t watch out for a CE sign on that one xD

Poked at my Sabrent USB 3 Hub (on #Linux PC) to see if it's up for the task. tl;dr: Do not use for disks (or power hungry devices) to prevent data loss.

Poked at my Sabrent USB 3 Hub (on #Linux PC) to see if it's up for the task. tl;dr: Do not use for disks (or power hungry devices) to prevent data loss.