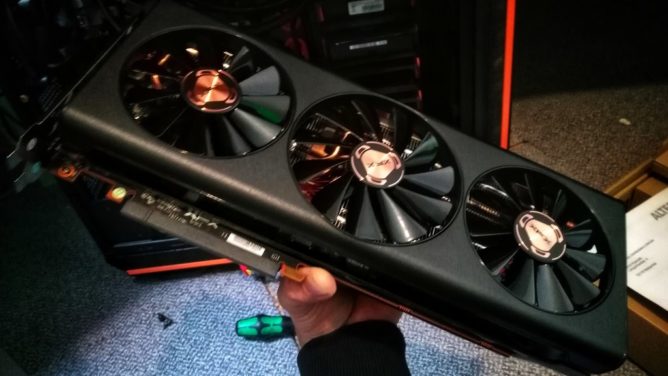 Man, this is a 180° turn for me. When I started out with Linux the GPUs where usually troublemakers and I kinda got used to throw moar power at it to solve the problem. Spent nights fiddling with Elsa Winner or 3Dfx Vodoo or some ATI cards (that eventual became AMD). When laptops of mine could no longer be used because AMD simply dropped support for perfectly fine hardware I was really never again buying from it again.

The background for finally ripping out the heart of my Linux PC is basically this issue: https://beko.famkos.net/2020/01/17/computer-fallen

This is followed by a frozen X server rendering all HID interfaces dead until reboot. It happened once or twice a week. NVIDIA support has no idea and while the card is still fine and up for any task I finally decided to get a more recent GPU hoping that the problem will be gone (and not be an issue from the mainboard).

The decision to try AMD again after a decade was basically made because I read so much positive news on their open source drivers and general good support by Mesa nowadays. Since nothing about the old fglrx days is valid any more this is sort of a jump into cold water for me 🙂

I decided for the slightly older RX 5600 XT 14Gbps 6GB (THICC III Pro) edition by XFX that seems to be good for 1080p gaming and this is close to my main display resolution of 1920×1200. While I never heard of XFX before I was hooked by NO RGB and that tiny vBios switch it has offering a backup bios. That’s a feature I like in my mainboards as well.

Speaking of I heard a lot of confusion on said vBioses on this series so I digged deeper on this topic. Thankfully a lot of the legwork was already done for me by André Almeida who describes the process for Linux PC on https://andrealmeid.com/post/2020-05-01-vbios2/ after a lot of research in part 1.

With the help of the mentioned tool amdvbflash I was able to drag the following vBios information out of the GPU:

The extracted rom of the active vBios (switch was set on position closer to power connector) has the sha1sum 9ce7ecc9625d7ff39b3b08c45916b6c2e3bf4a8c and is according to the flashing tool valid and signed. I understood it’s a bad idea to flash with an unsigned rom because the GPU will probably refuse to boot. I’d upload it to techpowerup that seems to collect such roms and allows hassle free downloading but their extract and upload tool seems to be for Windows PC only.

XFX has vBios roms for the 12Gbps variant on it’s website but currently none for this one so it seems it is up to date already.

Installing it was a breeze. I upgraded to Fedora Workstation 32 before changing the GPU to make sure I get more recent drivers and that was it. System booted up just fine and the card worked out of the box. Unlike NVIDIA I didn’t need to download a specific driver first or add some further repository. There’s this nice tool CoreCtrl that shows me a power consumption of only 14W while the card is in idle with zero spinning fans. That’s right – no noise! When not in use this card consumes next to no resources which begs the question how I’m going to heat my man cave from now on 😀

This surprised me as well. All the cool bits are laid out for me to play with at /sys/class/drm/card1/device/. I mean I’m not much into over-clocking but it’s all there. This brings me to benchmarking the new GPU. I’m not some YTer so you’ll only get the Unigine Superposition benchmark with basically irrelevant OpenGL (I know of no nifty Vulkan benchmark like this yet) for Linux PC gaming.

That’s rad! My old Titan X has it’s stronger side in other features but managed only a total result of 3055 without over-clocking on this benchmark.

I’ve not much gaming experience with it yet. I just made sure that Valheim (beta) and X4 Foundations works fine with it. There seems to be some sound issue with Discord + Fullscreen that I found so far but I solved this by switching to windowed mode on the games seeing no difference in FPS.

The one notable issue I have compared with NVIDIA is that I have to set the environment variable DRI_PRIME=1 or games will pick up the integrated GPU of the i5-8600K. This is probably because I’ve a display connected to it as well so it’s active. Going to play with this a little until I get the idea. Will need some adapters first tho 😅

Update: Just as guessed. Once I had all my adapters in place the integrated GPU was not needed any more and does no longer show up. No need to use DRI_PRIME=1 for each 3D application any more.

12 thoughts on “Pulling the plug on nvidia”

Pulling the plug on my nvidia for an amd on my Linux PC with some benchmarks and background info.

Pulling the plug on my nvidia for an amd on my Linux PC with some benchmarks and background info.