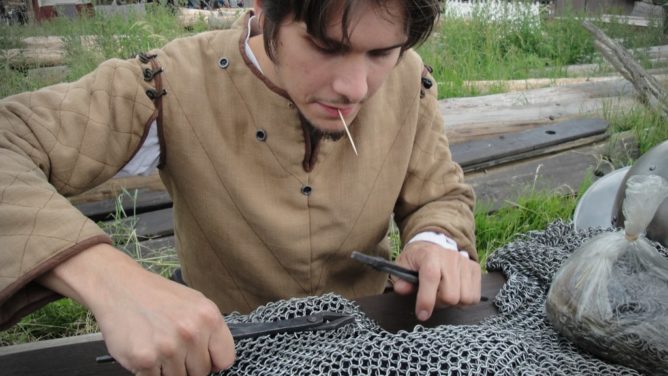 I was nominated by Sebastian Reinbold to annoy everyone with LARP images of myself for ten days. I’ll pass on the nominating part myself – your timeline is yours and I usually do not participate in such ‘games’ anyway – but since it has been a while and I’m sort of having nostalgic flashbacks going by now, here goes nothing:

This image was taken during breakfast on the Irrlichter SWL in 2010. My participation was a last minute surprise and all of my gear was borrowed for the roles I got to play.

It also was an indoor con set in the SW verse and in the wintertime.

Next in line is really old. It was taken in 2003 on Nebellegenden 8 – Auf den Spuren des Heiligen Prätorius where I – the smallest NSC in the group – got to play a bear.

This is a fun story because the costume was shrunk after washing and I was the only one who fitted somewhat into it at all.

The next one was at Rathad an Damh – Der Weg des Hirschen 1 in 2016 probably taken by Aerfeiniel.

The setting was a celtic horror con in October and featured many undead zombies and litres of artifical blood.

In the end I almost collapsed from dehydration and sleep deprivation but I was happy. So much fun and very epic moments. I’m just a bit sad that I missed most of the great feast in the end due to that.

This one is not exactly LARP and falls probably more into the category of Living History.

While my clothes are a wild mix mostly originated in LARP this is from a hike in mediaeval gear.

I don’t recall the year but I remember the walk of 20km in period footwear – and one guy even barefoot.

This is a more recent one from 2017. I have no idea who took this but the con was In der Flanke des Feindes.

The con was a bit unusual for me because I was a cast SCs but not allowed in the NSC camp on this. I don’t even remember the exact reasons but I remember doing what I do best a lot – getting beaten down 😀

I’ve also very fond memories of my tent oven because this was a rainy and cold weekend and we enjoyed plenty of hours in the warm tent playing dices.

This reminds me of a very arid one. It’s the infamous NewNo Order 2003.

Water had to be fetched from far away, so we had people picking up water for the camp all the time.

The camp was located on a dry meadow with a high voltage overland line over our heads.

Dust was everywhere. In the air, our shoes and probably even in the food. In the end there was eventually a thunderstorm and I’ve never seen people getting out of their plate armour in such a short time.

Speaking of armour. This one is from Drachenfest in 2002 and I’m wearing my very first mail. Well, sort of 😀

That was basically my second part of protective gear at all and out of money this was all I could muster back then. The helmet was my first and most important part.

There’s a story on that nasal helmet by the way. On my very first con I took a bad slash to my face. The nasal was bent and I had to form it back into shape. Almost nobody had a helmet in 2002 and I was really happy for mine.

People will laugh at this nowadays but twenty years ago I was proud on this piece 😉 Wonder where it ended up.

Here I played probably for the last time my Witcher back in 2014 at Der ruhelose Wald 2.

There’s a certain satiation for Witchers in LARP by now and frankly others play way better. Well, mayhap not the sword-ing but the costumes. The standards are high nowadays.

Sorry for the bad quality of the image. Somehow I never got my hands on a decent picture for this role – which is kinda sad.

Here is another one where I’m very sad that I got no decent picture of. It’s from 2004 – Drachenfest.

I was on guard duty – something I seem to do a lot as well (pestering people for Permit A 38 is so much fun) – wearing a borrowed cuirass. It was a perfect fit and I was sorry when I had to hand it back to it’s proper owner.

Years later I’m not much interested in this type or armour any more and while people look great in it it’s just too much of a burden for me anyway. Running away has proven to work as well 😉

That’s it. Thanks for staying with me through my flashback on LARP. A hobby I was infected with in 1996 due to the magazine PC Spiel Fantasy Special.

Many other of my interests nowadays are a direct result of this and while I seldom find the time to go for a play nowadays I still do so on [rare] occasions (and of course I let my children play with foam swords 😉 ).

6 thoughts on “Slices of LARP”

I was nominated by Sebastian Reinbold to annoy everyone with #LARP images of myself for ten days. This triggered some flashbacks and sparked this article (showing 10 images ;))

I was nominated by Sebastian Reinbold to annoy everyone with #LARP images of myself for ten days. This triggered some flashbacks and sparked this article (showing 10 images ;))