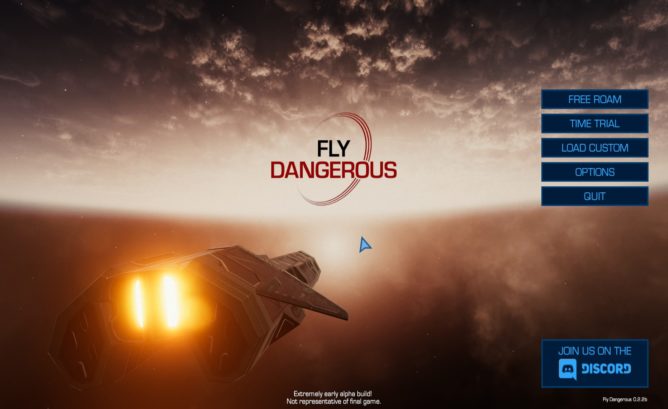 Racing in space sims is a thing and usually done by a small and sometimes hidden community within games like Elite Dangerous or Star Citizen. What happens when this is not enough for players, or when they simply don’t want to waste time grinding the required resources in-game, is demonstrated by @jayleefaulkner at https://github.com/jukibom/FlyDangerous

I was delighted to find Linux PC binaries over at https://jukibom.itch.io/fly-dangerous as well – and this is a very early alpha even. Guess someone pestered the dev about Linux already and I so had to give this a spin, of course.

Unpacking the FlyDangerous-0.2.2b-linux.zip was a no brainer and the game itself started just fine. I do have however a very specific triple head display setup and the game started on the wrong display in fullscreen mode and could not be persuaded to go into windowed mode so I could reach the buttons to change the display resolution via hotkey or tweak the config at ~/.config/unity3d/StarGoat/FlyDangerous/prefs. It insisted of staying on defaults so once more wmctrl to my aid:

Yes… this will do!

After this was sorted out I noticed that Unity detected “some” joystick with only an X and an Y axes. This doesn’t do my X52 Professional H.O.T.A.S justice. Usually I’d use the controller mapping in Steam now but this isn’t a Steam game and while it can be added as a foreign game to Steam I can not set any controller configs for it there so I started looking around.

Apparently (modern) Unity uses SDL2 and the modern evdev input system to detect joysticks on Linux PC and this can be indirectly configured / overridden using the environment variable SDL_GAMECONTROLLERCONFIG to provide additional input configurations like the ones listed in https://github.com/libsdl-org/SDL/blob/main/src/joystick/SDL_gamecontrollerdb.h (that somehow does not know of the X52 H.O.T.A.S?). Luckily there are various tools to create a mapping for this – for example Gamepad Tool at https://generalarcade.com/gamepadtool/ – which sure looks familiar enough from the re-mapping I’m used to by… Steam! AntiMicroX should also work for this but I didn’t try.

And since I’m on Linux and totally lazy I threw all this in the script file flydangerous.sh to start the game:

What to say – Fly Dangerous sure hits a nerve here and I wonder what more is to come.

At least gaming itself is easy as pie on Linux in 2021. Very very very early indie and alpha version games? Not so much 😉

+++ This is a backyard hosted website on 2nd hand hardware, which means it sometimes goes offline. Please hold the line. +++